Register for IDC events on the Division of Diversity, Equity and Inclusion’s Eventbrite page. The Intercultural Diversity Center is located in 2100 Student Center. For more information, contact the Center at ua_idc@ua.edu.

TEDTalk Tuesdays: ‘Behind the Great Firewall of China’ 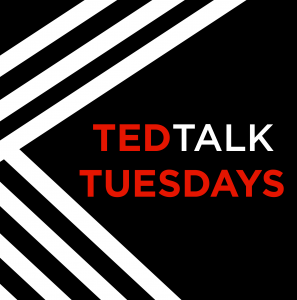 The Intercultural Diversity Center will continue its TEDTalk Tuesday Series in observation of Asian American Pacific Islander Heritage Month featuring, “Behind the great firewall of China.” Michael Anti (aka Jing Zhao) has been blogging from China for 12 years. Despite the control the central government has over the Internet—”All the servers are in Beijing”—he says that hundreds of millions of microbloggers are in fact creating the first national public sphere in the country’s history and shifting the balance of power in unexpected ways. 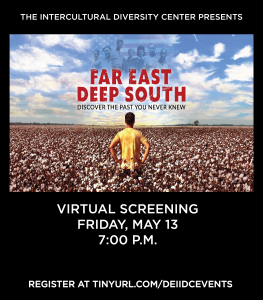 For Asian American and Pacific Islander Month, the Intercultural Diversity Center will offer a virtual screening of “Far East Deep South.” A Chinese American family’s search for their roots leads them to the Mississippi Delta, where they stumble upon surprising family revelations and uncover the racially complex history of Chinese people in the segregated South. This film explores a personal and eye-opening perspective on race, immigration and American identity and sheds light on the history of Chinese immigrants living in the American South during the late 1800s to mid-1900s. Registration is required. 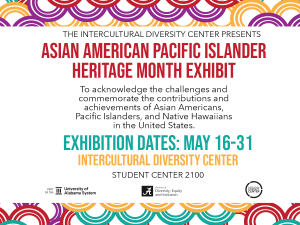 In commemoration of Asian American Pacific Islander Heritage Month, the Intercultural Diversity Center will house a monthlong exhibit featuring information on the challenges, contributions and achievements by Asian Americans, Pacific Islanders, and Native Hawaiians. In 1978, the U.S. Congress recognized Asian/Pacific American Heritage Week and passed a law expanding the observance to a month in 1990. The month of May was chosen to commemorate the immigration of the first Japanese people to the United States on May 7, 1843, and to mark the anniversary of the completion of the transcontinental railroad on May 10, 1869. Participants  will learn about the creation of AAPI, and prominent figures in military, education, art and inventions we use today.

The Intercultural Diversity Center will continue its TEDTalk Tuesday Series in observance of Asian American Pacific Islander Heritage Month by featuring, “My Escape from North Korea.” As a child growing up in North Korea, Hyeonseo Lee thought her country was “the best on the planet.” It wasn’t until the famine of the 1990s that she began to wonder. She escaped the country at 14, to begin a life in hiding, as a refugee in China. Hers is a harrowing, personal tale of survival and hope—and a powerful reminder of those who face constant danger, even when the border is far behind. 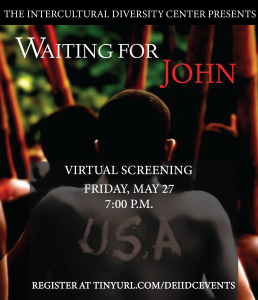 An indigenous community worships American materialism on the tiny Pacific island Tanna. When the American military arrived during World War II, the islanders were amazed by America’s fantastic cargo—planes, trucks, refrigerators, canned food. They thought such goods could only come from the Gods. Led by the mysterious prophet John, a religion was born, the John Frum Movement, also known as a Cargo Cult. “Waiting for John” explores this extraordinary religion from the perspective of the last village of believers, the depth of the John Frum Movement and their struggles to preserve their way of life. Registration is required.