Even in the midst of a pandemic, The University of Alabama is continuing to make its spaces and places more reflective of inclusive excellence thanks to the opening of the new Intercultural Diversity Center.

A small, but socially-distanced crowd was on hand Oct. 14 as UA’s vice president for Diversity, Equity and Inclusion G. Christine Taylor cut the ribbon on the new IDC at the Ferguson Student Center.

“In hard times, it is especially important to create home places, safe places among trusted friends to seek refuge and dress the wounds of battle and safe places for hard conversations,” Taylor said.

Lately most of those hard conversations have been happening on Zoom, via Facebook Live or other virtual platforms. Often the opinions and emotions associated with talking about race can spark controversy and negative reactions that spill over from the virtual platforms to social media.

Now UA has a place for students to learn how to understand each other’s perspectives.

“The IDC is all about advancing our mission for intercultural learning, intercultural sharing, and all the other aspects that make our ability to interact with one another so important,” said Dr. Jim Dalton, UA’s executive vice president and provost.

Unlike other offices or official university spaces, the IDC will be open seven days a week with extended hours until 9 p.m. Mondays through Thursdays.

“Those hours are set for individuals to connect at any time,” said LaToya Scott, assistant vice president for university engagement and programming. Scott also currently serves as director of the IDC, which will initially focus on cultural exploration, educational engagement and social enrichment.

The opening of the new Intercultural Diversity Center in Ferguson Center really exemplifies the substantive, long-term change that we know institutions of higher learning must make if they are to show their commitment to inclusive excellence. And, that change does not happen overnight. 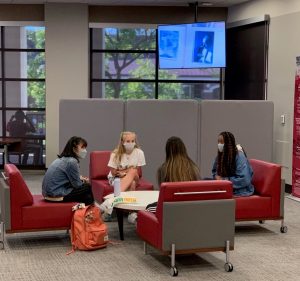 “I believe this space will provide a sense of place for students — individuals from all backgrounds, from all walks of life, and from all perspectives,” said Demarcus Joiner, UA SGA president. “I want to challenge my peers, my fellow students, not to settle for just this space. The burden is on all of us to keep advocating and to keep pushing to make diversity, equity and inclusion a reality.”

Joiner is the fourth African American to serve as president of the SGA. Last year, he was the first to serve as SGA’s vice president for diversity, equity and inclusion.

Joiner along with Harrison Adams, who preceded him as SGA president, when they were SGA senators authored legislation that called upon the University to open a space devoted to diversity at the center of campus.

This will be the second location for the Center, which first opened February 2016 on the first floor the Riverside Community Center. At the time, it was part of the University’s Division of Student Life.

It has been four years since I along with Drs. Elle Shaaban-Magana and Norm Baldwin co-chaired a subcommittee of the University’s Strategic Planning Task Force. Our subcommittee was focused on diversity. Among our recommendations was the creation of an “Equity, Diversity and Inclusion Center” headed by a director who reports to the vice president/associate provost for Diversity and Inclusion. The primary responsibility of the Center would be to provide training, coursework programming and safe spaces for diverse students.

One of the source documents that our subcommittee had as we began our work in Spring 2016 was a memo with thoughts and recommendations from Damon Williams, a highly sought-after diversity expert and author of “Strategic Diversity Leadership: Activating Change and Transformation in Higher Education.”

After his visit to our campus for presentations in 2015, Williams challenged our campus leaders to build platforms that will allow UA’s commitment to diversity “to move from the margin to the center of the campus’s public consciousness.”

The relocation of the Intercultural Diversity Center to the main floor of the Ferguson Student Center at least physically places diversity at the center of public consciousness.

Since Williams’ visit, student groups such as those operating under the banner of “We Are Done” have staged demonstrations calling attention to the need to do more in the area of diversity. One of the 11 demands of this student group was to provide “Permanent Safe Space for Students of Color in the Ferguson Student Center.”

Today, in addition to the IDC, which addresses all types of diversity, the Black Student Union, which was known as the African American Association when it was founded 52 years ago, has its own office and work space on the first floor of the Ferguson Center.

Even though most of the students in “We Are Done” who issued the calls for change are now UA alumni, they should take a bow for having the courage to speak up.

What students in “We Are Done” did in 2015 has been followed by the recent activism of University of Alabama football players who in August held a protest march against recent acts of racial injustice. They were joined by dozens of students and others from the UA community who marched from Mal M. Moore Athletic Facility to Foster Auditorium where Gov. George Wallace tried to prevent the enrollment of Vivian Malone and James Hood in June 1963.

It was 15 years ago this month Vivian Malone Jones passed away. But, what she, Hood and Autherine Lucy, who first attempted to integrate the institution in 1956, started can continue with the changes that are happening at their beloved alma mater now.

Photos of Jones, Hood, Lucy and other trailblazers for diversity appear on the History Wall that is among the first things visitors see as they enter the new IDC.

The opening of the Intercultural Diversity Center comes as The University of Alabama Board of Trustees recently renamed Nott Hall, which was dedicated in honor of physician and scientist Josiah Nott. Today, what was Nott Hall is now Honors Hall, home of the UA Honors College.

“We deem this an appropriate and worthy designation for this academic building at this time for our students, faculty and staff to pursue excellence and to demonstrate the university’s commitment to diversity, fairness, equity and inclusion,” said UA Trustee John H. England, Jr., who led a six-person working group of members of The University of Alabama System Board of Trustees this summer to examine names of all buildings at the system’s three campuses.

The same Board of Trustees decided in 2019 to name UA’s newest freshman residential community after England. Opening originally as “New Freshman Hall” at the former location of Somerville Hall in 2018, John England Hall was the first building on the UA campus named for an African American.

England was one of the first African Americans to graduate from The University of Alabama School of Law. In 1985 he was elected to Tuscaloosa City Council, one of the first Black officeholders in the city since Reconstruction.

It is not enough to honor and celebrate past accomplishments. Indeed, spaces like John England Hall and the Intercultural Diversity Center need to be spaces where dialogue and planning for an inclusive campus reflecting diversity are positioned to address issues of equity. Even in a school year when many faculty and staff are working remotely, the steps needed for progress can and must be taken.

From Spaces and Places to People and Projects

McNair and her co-authors ask readers to assess where are they are on their equity journey. They note that equity is a core concept of what it means to make excellence inclusive and it is deeply integrated with diversity and inclusion efforts. 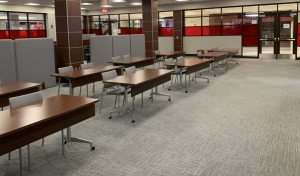 According to Scott, in the IDC, students will have an opportunity to have class, connect with one another and host events. Toward the goal of helping students assess where they are on their equity journey, I can think of at least a half-dozen ways to use the IDC for cultural exploration.

In the immediate future while in the pandemic, with our masks and social distancing in mind, the large, open spaces of the IDC should facilitate short, small group meetings as one way to promote social enrichment.

Faculty and staff can get together with students and conceive of much-needed research projects that add to the scholarship of teaching and learning on race and racial injustice.

The Ferguson Center where the IDC is located falls under a division (Student Life) now headed for the first time by an African American. He joins another African American who serves as our vice president for Diversity, Equity and Inclusion. Each of them has direct reports also from racial minority groups. So, we have more diverse faces than ever at The University of Alabama in the highest levels of administration.

The bottom line is while we have made great progress on our journey to diversity, equity and inclusion with new spaces and places on campus and some progress with more inclusive personnel in leadership, it is time to engage in some projects that reflect the goals of having these spaces and places.

George L. Daniels, Ph.D. is an associate professor of journalism and creative media in the College of Communication and Information Sciences at The University of Alabama. He also chairs the Campus and Community Outreach Committee of UA’s Black Faculty and Staff Association.

This piece originally appeared as an op-ed in The Tuscaloosa News on Oct. 18, 2020.