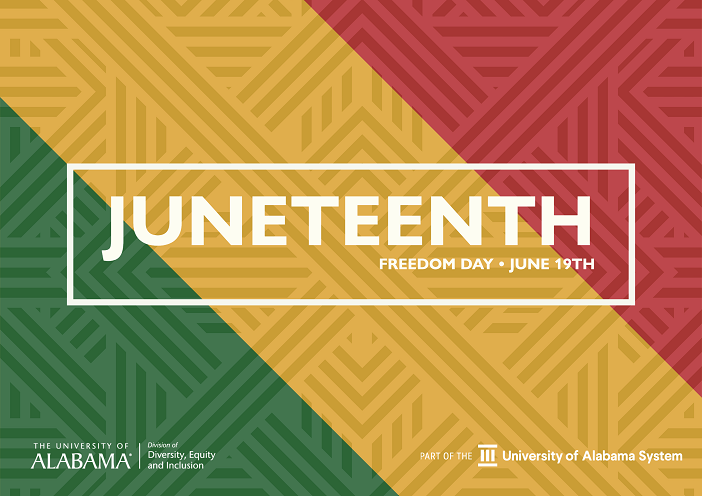 Juneteenth (short for “June Nineteenth”) marks the day when federal troops arrived in Galveston, Texas, in 1865 to take control of the state and ensure that all enslaved people be freed. The troops’ arrival came a full two and a half years after the signing of the Emancipation Proclamation. Juneteenth marks an effective end to slavery in the United States and is considered the longest-running African American holiday. — History.com

In 2012, Alabama became the 40th state to observe Juneteenth through the passage of legislation sponsored by State Sen. Hank Sanders. Juneteenth, or June 19, was first recognized by Congress as Juneteenth Independence Day in 1997.

Also, Alabama Gov. Kay Ivey authorized June 18, 2021, as a holiday for Alabama state employees. The University of Alabama is honored to recognize the first official Juneteenth holiday this year with an added annual leave day to be used at employees’ discretion. The holiday will be added to our official calendar beginning next year. It is important that the University honor and acknowledge this poignant date in our history in an appropriate way for years to come.

The UA Black Faculty and Staff Association will have a virtual Juneteenth observance on June 10 and June 14 on Facebook Live. Presenters will be Dr. Reynaldo Anderson, who will give a presentation on Re-Envisioning Freedom through Afro-futurism; Dr. Cynthia Gooch Grayson, who will present Juneteenth & Genealogy: The Exploration of the Black Family; Marvin E. Adams, UA student poet; and Opal Lee, Juneteenth activist and advocate who was instrumental in getting Juneteenth recognized in 47 States. For more information, visit the BFSA event page on Facebook.

Due to anticipated inclement weather on June 19, some Juneteenth celebrations scheduled for Alabama may have been canceled or postponed.

A free celebration featuring food, music and vendors is planned for Saturday, June 19, from 10 a.m. until 2 p.m. in Snow Hinton Park. More information is available on Facebook.

Another celebration is planned for Saturday, June 19 from 10 a.m. until 10 p.m. at Kentuck Park. Free food, bounce houses, games and activities. See more information on Facebook.

Several Juneteenth celebrations are planned for locations throughout Alabama, including Birmingham, Bessemer, Fairfield and Selma. Read more those events and see what’s happening in Huntsville.

If you’re traveling to nearby states in mid-June, you might check out these events throughout Georgia and in Starkville, Louisville, and Gulfport, Mississippi. Also, the Louisiana Juneteenth Association will host the Madam CJ Walker Juneteenth Celebration, which includes a parade and music festival, June 18-20, and other events will be held throughout the state. In Tennessee and Florida, several events also are scheduled.

The Juneteenth Foundation, a 501(C)3 organization founded by professionals championing the celebration of Juneteenth as a federal holiday, will host its virtual Freedom Festival, which includes panel discussions, a career fair and a concert the weekend of June 18-19.

Read more about the history and celebrations of Juneteenth below.

What is Juneteenth? (PBS.org)

This Is How We Juneteenth (NYTimes.com)

How Industry Leaders are Moving to Embody the Spirit of Juneteenth (Forbes.com)

Companies are Celebrating Juneteenth in Unique Ways This Week (CNN.com)

Hawaii to Recognize Juneteenth as a Holiday, Leaving Just One State Still Holding Out (TheHill.com/Changing-America)