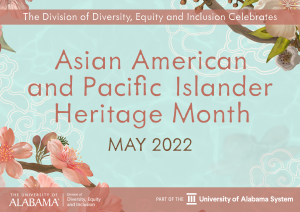 Asian American, Native Hawaiian, and Pacific Islander Heritage Month—also known as AAPI or API Heritage Month—is observed annually in May to celebrate the contributions that generations of AANHPI people have made to American history and culture. The Federal Asian Pacific American Council has selected the theme “Advancing Leaders Through Collaboration,” which is part of a series of themes for 2021-2024 highlighting the Council’s efforts in “Advancing Leaders.” FAPAC is a non-profit, non-partisan organization that supports the interests of  AANHPI employees in the federal and District of Columbia governments. Since 1985, FAPAC has promoted equal opportunity and cultural diversity for Asian American, Native Hawaiian and Pacific Islanders in public service.

Information on AANHPI immigration history, a timeline, websites, social justice resources and free bystander training can be found below.

(This historical timeline was compiled in collaboration with Dr. Nahree Doh, associate director of Clinical and Outreach Services and licensed psychologist at the UA Counseling Center. She presented “What it Means to be an Asian American, Pacific Islander: History, Identity and Allyship” at the May meeting of Diversity, Coffee and Conversations, a monthly education program of the UA Division of Diversity, Equity and Inclusion.)

Nationality Act Congress first defined citizenship by naturalization in this law and limited this right to “free white persons.” In practice, only white, male property owners could naturalize and acquire the status of citizens, whereas women, nonwhite persons, and indentured servants could not.

Filipinos The first Asian American settlement in the United States was established by Filipino fishermen.

Arrival of large numbers of Chinese men Chinese workers migrated to the United States, first to work in the gold mines, but also to take agricultural jobs, and factory work, especially in the garment industry. Chinese immigrants were particularly instrumental in building railroads in the American west, and as Chinese laborers grew successful in the United States, a number of them became entrepreneurs in their own right.

California passed anti-miscegenation law This statute, on the books since California achieved statehood in 1850, specifically banned interracial marriage between white and Blacks, declaring that “all marriages of whites with negroes and mulattoes are declared to be null and void.” The statute was later amended to ban the marriage of whites with people from other racial minority groups, including “Mongolian” or “malay,” in response to a subsequent increase in immigration from Asia.

Chinese Exclusion Act This U.S. federal law was the first and only major federal legislation to explicitly suspend immigration for a specific nationality. The basic exclusion law prohibited Chinese laborers—defined as “both skilled and unskilled laborers and Chinese employed in mining”—from entering the country.

Hells Canyon Massacre Considered one of the deadliest attacks against Chinese Americans in U.S. history, this event occurred when a gang of white horse thieves gunned down more than 30 Chinese laborers who were mining in northeast Oregon.

United States v. Wong Kim Ark This landmark decision by the Supreme Court determined the 14th Amendment to the U.S. Constitution granted birthright citizenship to all persons born in the United States regardless of race or nationality.

Hawaii was the first U.S. possession to become a major destination for immigrants from Japan, and it was profoundly transformed by the Japanese presence.

Gentleman’s Agreement This was an informal agreement between the United States of America and the Empire of Japan to ease growing tensions between the two countries, particularly pertaining to immigration.

Immigration office at “Angel Island” open By the 20th century, a national system was established for specifically regulating Asian immigration. As part of the system, a new facility on Angel Island, the largest island in the San Francisco Bay and far from the mainland United States, was built.

Alien Land Law The governments of many western states targeted  Japanese Americans by passing legislation that banned “aliens ineligible for citizenship” from owning or leasing land.

Immigration Act This law is best known for its creation of a “barred zone” extending from the Middle East to Southeast Asia from which no persons were allowed to enter the United States.

Japanese American Internment Camps Japanese internment camps were established during World War II by President Franklin D. Roosevelt through his Executive Order 9066. From 1942 to 1945, it was the policy of the U.S. government that people of Japanese descent, including U.S. citizens, would be incarcerated in isolated camps.

Repeal of the Chinese Exclusion Act The repeal allowed Chinese immigrants to become naturalized citizens, but it did not extend benefits to other Asian immigrants.

The Luce-Celler Act (Indian and Filipino) Along with the repeal of Chinese exclusion in 1943, the Luce-Celler Act further undermined Asian exclusion and emphasized foreign relations over racial discrimination by extending naturalization rights and immigration quotas to other key U.S. allies in Asia, the Philippines and India.

McCarran-Walter Act This act reformed some discriminatory provisions in immigration law but imposed a racialized quota system and introduced a system of preferences based on skill sets and family reunification.

The Immigration Act This law abolished an earlier quota system based on national origin and established a new immigration policy based on reuniting immigrant families and attracting skilled labor to the United States.

Vietnam War ended: The war as a conflict in Vietnam, Laos and Cambodia from 1955-1975 and was fought between North Vietnam and South Vietnam. After the war, more than 3 million people fled their war-torn countries, with more than 1 million coming to the United States. Many others went to other countries or drowned at sea.

Waterman-Duke: Ambassador of Aloha/PBS
Narrated by Jason Momoa, this is the story and considerable impact of five-time Olympic medalist Duke Kahanamoku. He shattered swimming records and globalized surfing while overcoming racism in a lifetime of personal challenges. Shown during May on Alabama Public Television/PBS

Timeline of Chinese Immigration to the United States

Asian Americans and Pacific Islanders in the U.S. Navy

Right to Be is a nonprofit organization that offers bystander intervention training to teach people how to stop harassment. Below are resources and free training opportunities.