At the turn of the century efforts began to gain a day of recognition for the significant contributions the first Americans made to the United States. Those efforts later led to a whole month of recognition when in 1990 President George H. W. Bush approved a joint resolution designating November 1990 “National American Indian Heritage Month.”

IllumiNative – Created and led by Native peoples, IllumiNative is a new nonprofit initiative designed to increase the visibility of – and challenge the negative narrative about – Native Nations and peoples in American society.

Thrive Unltd. – Thrive Unltd. is a collective of individuals representing various tribal nations working to empower Indigenous communities to heal from the inside out. Thrive was founded with the intent to create a new narrative for Indigenous peoples that identified them as resilient nations who heal and thrive, rather than being defined by trauma, coping and mere survival.

Basketry Activity – Learn how to make your own basket with these instructions and video from Moundville Archaeological Park.

The Intercultural Diversity Center will be providing a PowerPoint presentation in observance of Native American Heritage Month. This presentation will celebrate rich and diverse cultures, traditions and histories, acknowledge the important contributions of Native people, and raise awareness about the unique challenges Native people have faced both historically and in the present, and the ways in which tribal citizens have worked to conquer these challenges. For more information, contact the Intercultural Diversity Center at ua_idc@ua.edu. 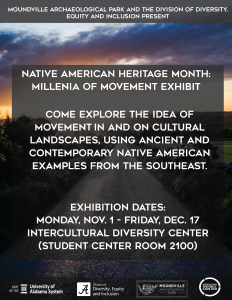 The Millennia of Movement Exhibit explores the idea of movement in and on cultural landscapes, using ancient and contemporary Native American examples from the Southeast. Guests will learn about the dynamic and enduring Native connection to vast natural landscapes. The exhibit will engage visitors by answering broad questions such as what types of things move and moved on these landscapes (objects, ideas, people), how do/did they move on landscapes (water travel, roads/paths, oral communication), and why do/did they move in these ways (subsistence, power, religion, wealth, and most importantly, identity). It will highlight archaeologically identified examples of movement such as trade, exchange and the movement of ideas through symbols called iconography. It also will highlight contemporary Southeastern cultures, many displaced involuntarily during the Indian Removal period. In addition, focus on the persistence of identity and culture between tribes removed to Oklahoma and elsewhere, and those that remained in traditional regions. These include the Choctaw, Cherokee, Chickasaw, and Creek among others. The exhibit is presented by the Moundville Archaeological Park and Division of Diversity, Equity and Inclusion. For more information, contact the Intercultural Diversity Center at ua_idc@ua.edu.

This event is an enrichment program that requires participants to attend and engage in local Native American cultural and archeological events and programs throughout the month of November. Participants will register to participate in the scavenger hunt in exchange for prizes and a T-shirt. Once registered, they will be given a game code through the Goose Chase Scavenger Hunt program for objectives that must complete during the month of November. The NAHM Scavenger Hunt will be facilitated through a free version of the Goose Chase App. Contact wgrc@ua.edu for more information. 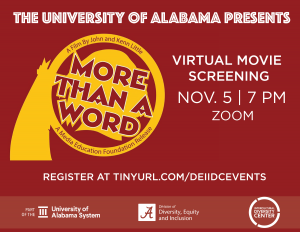 The Intercultural Diversity Center will continue its Fall 2021 Social Justice Movie Series by featuring “More Than a Word” in observance of Native American Heritage Month. Participants will explore Native American-based mascots and their impact on real-life attitudes, issues and policies, the history of the slanderous term “redskin,” and cultural stereotypes of Native Americans and their relationship to history. Registration is required at http://tinyurl.com/deiidcevents. For more information, contact the Intercultural Diversity Center at ua_idc@ua.edu.

Participants are encouraged to share their experience with Moundville Archaeological Park on social media using #Moundville5K. 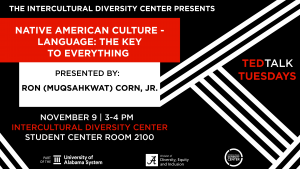 TEDTalk Tuesdays: ‘Native American Culture – Language: The Key to Everything’

The Intercultural Diversity Center will observe Native American Heritage Month with its TEDTalk Tuesday Series by featuring, “Native American Culture – Language: The Key to Everything.” One of the most significant losses to the Native American culture is the loss of the indigenous language. Participants will hear from Ron (Muqsahkwat) Corn, Jr. as he addresses the need to revitalize the Menominee Native American language. The opening and closing moments of this talk are spoken in the endangered Menominee language, currently understood by only a few dozen people worldwide. For more information, contact the Intercultural Diversity Center at ua_idc@ua.edu. 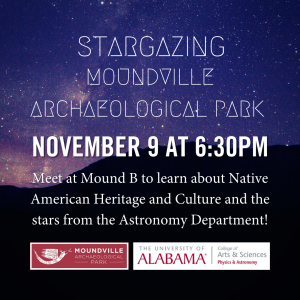 Moundville Archaeological Park will offer star gazing and information about Native American culture history from the UA Astronomy Department. Park at Mound B. 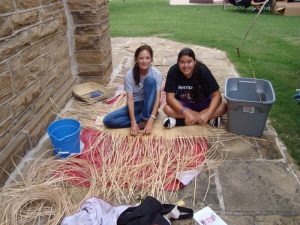 The Intercultural Diversity Center presents its final Food for Thought: Cultural Learning, Sharing and Teaching installment in observance of Native American Heritage Month. This program will address the rich and diverse traditions and histories of Native American people and includes a special demonstration by Mary Smith focused on the meaning and role of basket weaving. In addition, participants will have the opportunity to engage in making their own baskets, while supplies last. Smith, a member of the Muscogee (Creek) nation of Oklahoma, is a contemporary artist who is best known for the revival of the double false braid rim technique in basketry. Her expertise in pottery and basketry is bridging the gap of the past and future native artists. Her legacy is to ensure her culture is not forgotten. Smith has received numerous accolades along her journey including Best of Show at Give Tribes Museum, Best of Class at the Hard Rock, and several first place awards. Registration is required. For more information, contact the Intercultural Diversity Center at ua_idc@ua.edu. 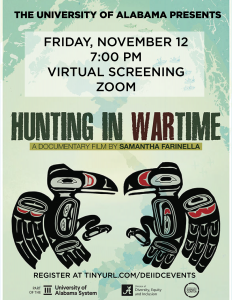 The Intercultural Diversity Center will continue its Fall 2021 Social Justice Movie Series by featuring “Hunting in Wartime” in observance of Native American Heritage Month and Veterans Day. Participants will learn about Tlingit Native Americans from the village of Hoonah, Alaska, who served in the Vietnam War, the complexity of serving a country that systematically oppressed them; a government that forbade the Tlingit language, over-logged their forests, and established laws that robbed returning vets of their ancestral trade as fishermen. Registration is required at http://tinyurl.com/deiidcevents. For more information, contact the Intercultural Diversity Center at ua_idc@ua.edu. 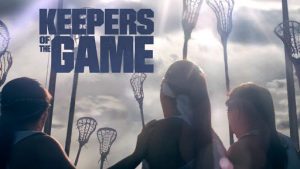 Documentary Screening: ‘Keepers of the Game’

Monday, Nov. 15 | 6 p.m. | Camellia Room, 2020 Gorgas Library
In Fort Covington, New York, an all-Native girls lacrosse team comes together seeking to be the first Native women’s team to bring home a section championship. But first, they will have to overcome their crosstown rivals and the increasing ambivalence in their own community. With more than just the championship on the line, the girls fight to blaze a new path for the next generation of Native women, while still honoring their people’s tradition in a changing world. The event is sponsored by University Libraries. 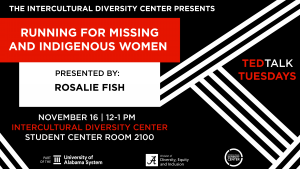 The Intercultural Diversity Center will continue its Fall 2021 TEDTalk Tuesday Series in observance of Native American Heritage Month by featuring, “Running for Missing and Indigenous Women.” Participants will learn from Rosalie Fish, an 18-year-old member of the Cowlitz Tribe and a competitive runner from the Muckleshoot Reservation in Auburn, Washington. She will discuss her career as a runner, representing her school in the Class 1B Washington State Track Meet, how she earned three gold medals and the reason she used that platform to raise awareness for missing and murdered indigenous women (MMIW). For more information, contact the Intercultural Diversity Center at ua_idc@ua.edu. 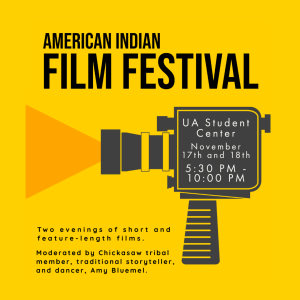 The Division of Diversity, Equity and Inclusion is sponsoring the Native American Film Festival held by Student Government Association and University of Alabama Museums. This two-day program will showcase films from Native American filmmakers and Native American tribal representatives with a focus on tribes descended from the U.S. Southeast. The ultimate goals of the event are to raise visibility of indigenous students and communities on campus and give room for more indigenous voices in academia on issues relevant to indigenous communities. For more information, visit https://museums.ua.edu/. 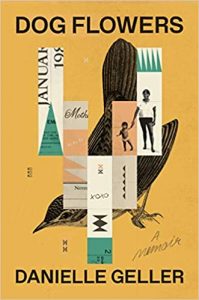 The Women and Gender Resource Center will continue its EveryWoman Book Club series by featuring “Dog Flowers” by Danielle Geller. This book follows a daughter who returns home to the Navajo reservation to retrace her mother’s life in a memoir that is both a narrative and an archive of one family’s troubled history. For more information, contact Elizabeth Lester at elester1@ua.edu or (205) 348-5040 to be added to the EveryWoman Book Club email list. You can also register for a single meeting online. Join the email for future updates at tinyurl.com/EveryWomanBookClub.

Staff and faculty are invited to join the Career Center for this National Association of Colleges and Employers event. NACE’s Game Changers Series, in recognition of National Native American, American Indian, and Alaskan Native Heritage Month, features game changers who share their personal stories and serve as models for working to bring about positive change. Connie Sheehan and Jack Soto, co-leads for NACE’s Tribal Colleges & Universities Affinity Group, will detail their stories, support of the association’s mission, and thoughts on becoming game changers. The interviewees will also share their personal game-changing experiences and what those have meant for their professional and personal lives. RSVP to Paige Miller at cpmiller1@ua.edu if you plan to attend. Attendees should be staff and faculty only. 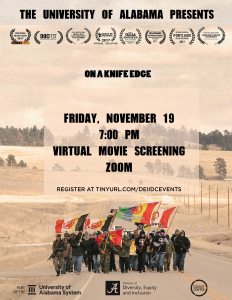 The Intercultural Diversity Center will continue its Fall 2021 Social Justice Movie Series by featuring “On a Knife Edge” in observance of Native American Heritage Month. Participants will explore a privileged view into the interior world of George Dull Knife as he becomes politically active with the American Indian Movement, confronts the challenges of growing up on the Pine Ridge Reservation, and wrestles with accepting leadership of his storied family from his aging father. Registration is required. For more information, contact the Intercultural Diversity Center at ua_idc@ua.edu.

Students are encouraged to sign up for a free tour of Lost Realms of the Moundbuilders: Ancient Native Americans of the South and Midwest at the Birmingham Museum of Art. According to the museum’s website, the exhibition explores the archaeology and history of the Mississippian Moundbuilders, their religious and ceremonial activities, farming and hunting practices, trade networks, and their highly-developed social, political and religious centers. The Moundbuilders highlights the relationships between the historic ceremonial sites and other contemporaneous Indigenous communities in North and Central America, and illustrates how ecological factors, specifically the occurrence of the “Little Ice Age” beginning in 1350 AD and lasting until 1650 AD may have led to the decline and ultimate abandonment of Moundbuilder sites.

Organized by the National Cowboy & Western Heritage Museum in Oklahoma, the exhibition features 175 historic objects from four major Mississippian Moundbuilder sites: The Spiro Mounds in Oklahoma, Moundville in Alabama, Etowah Mounds in Georgia, and Cahokia Mounds in East Saint Louis, Illinois. The exhibition also showcases contemporary Indigenous works of art that connect the art and artistry of the Mississippian Moundbuilder peoples to their modern descendants.

Students who sign up for the free tour are asked to meet at Smith Hall.