The video for this event is password protected. Those who registered for the event will receive an email to gain access.

The Division of Diversity, Equity and Inclusion will host a common read of “Caste.”  Sign up here via Qualtrics.

Isabel Wilkerson, winner of the Pulitzer Prize and the National Humanities Medal, will be the keynote speaker for The University of Alabama’s Black History Month celebration.

Wilkerson is the author of the critically acclaimed, New York Times bestsellers “The Warmth of Other Suns,” and “Caste: The Origins of Our Discontents.” During her presentation at UA, Wilkerson will discuss “Caste,” which was published in August 2020 to critical acclaim. In the book, Wilkerson reveals “a masterful portrait of an unseen phenomenon in America as she explores, through an immersive, deeply researched narrative and stories about real people, how America today and throughout its history has been shaped by a hidden caste system, a rigid hierarchy of human rankings,” according to Penguin Random House.

“I always maintain that context is critical to understanding the challenges of this day,” said Dr. G. Christine Taylor, UA vice president and associate provost for Diversity, Equity and Inclusion.” Ms. Wilkerson’s beautifully written book provides us with another avenue for increased understanding of the ongoing racialized milieu we face as a nation. While the issues are not new for many communities, understanding their origins and how we as all operate within them provides a powerful framework for understanding how we might move forward.”

Registration is required for this event. 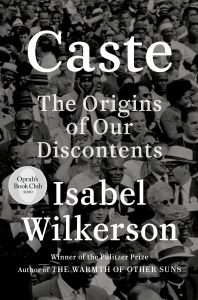 Leading up to the virtual presentation by Wilkerson, the Division of Diversity, Equity and Inclusion will host a common read of “Caste.” Faculty and staff who want to participate in group discussions about the book are asked to sign up via Qualtrics.

Copies of the book are available at the UA Supe Store and wherever books are sold.

Wilkerson’s other book, “The Warmth of Other Suns” won the National Book Critics Circle Award, among other honors, and was named to more than 30 Best of the Year lists, including The New York Times, the Los Angeles Times, The New Yorker and The Washington Post. TIME Magazine named it one of the “10 Best Non-Fiction Books” of the decade. The New York Times Magazine named Warmth to its list of the best nonfiction books of all time.

Wilkerson won the Pulitzer Prize for her deeply humane narrative writing while serving as Chicago Bureau Chief of The New York Times in 1994, making her the first black woman in the history of American journalism to win a Pulitzer Prize and the first African American to win for individual reporting. In 2016, President Barack Obama awarded Wilkerson the National Humanities Medal for “championing the stories of an unsung history.”

Recording of this event is not permitted.